History of The Gavel and Staff Lodge No. 9835

For a number of years Toastmasters and Beadles had been trying to form a lodge for members of their professions but at that time there was a reluctance by Grand Lodge to grant new warrants. Lodges were closing due to lack of support and Grand Lodge preferred that new lodges took over the warrants of these failing lodges.

When approached by the original potential founders, the existing members saw it as a saviour for their lodge - not what the founders wanted as they were trying to create a unique Lodge with a unique style. After a couple of years with no result, the original organisers gave up and the whole project was about to stop.

At that point Bro. Michael Hyman, one of the original founders, decided to take on the task. Finding that the remaining founders were still very enthusiastic he approached the Metropolitan Grand Secretary and his assistant for advice and guidance. The advice was not encouraging - they still wanted a failing lodge to be taken over. It was obvious that a list of names on a petition for a warrant would not get past the Secretary’s desk.

Undaunted, Bro. Mike contacted all the potential founders and during the next few weeks the word spread and soon there were about forty brethren expressing great interest. This was obviously a sound basis for starting a new lodge.

At a meeting of all the potential founders, Bro. Mike outlined and discussed a concept in a business plan. It was agreed to pursue the policy of petitioning Grand Lodge for a warrant for a new lodge. Permission to petition for a warrant was required from the Metropolitan Grand Master, so a five-page document was produced answering all the objections previously put forward. This was sent to the Metropolitan Grand Secretary who then granted a meeting to discuss the proposal in detail.

Five founders went with Bro. Mike Hyman to the meeting with the Metropolitan Grand Secretary, W.Bro Andrew Henderson and his assistant W.Bro John Wood. The document produced by Bro. Mike had impressed them and had answered all the questions they wanted to ask.

Two days later the Metropolitan Grand Master granted permission for a petition to be presented to the Grand Master for consideration.

In June 2007 at the Quarterly Communications of Grand Lodge, it was announced that the Grand Master had acceded to our petition and granted a warrant in favour of a new lodge to be given the name "Gavel and Staff Lodge" and the number 9835 in the register of Grand Lodge.

To see the 'family tree' of The Gavel and Staff Lodge No 9835, please click here.

Consecration of The Gavel and Staff Lodge No. 9835

Brethren had travelled from all over the UK and Europe to witness this special, rare occasion - England, Scotland, Wales, Holland, Belgium, Spain, USA and over 70 brethren from the Isle of Wight - what a fantastic turnout! Over 80 brethren travelled from Derbyshire to support the Worshipful Master and the lodge. 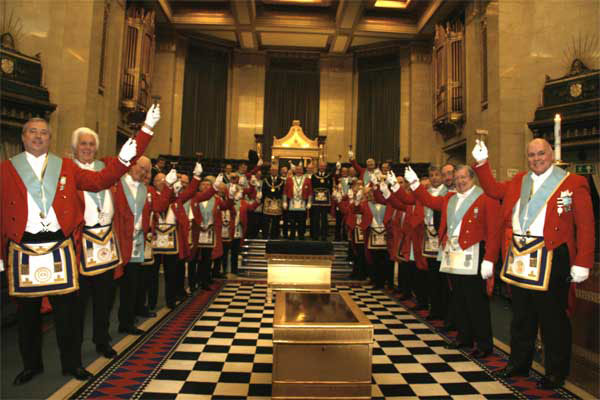 The founder members made up of 34 Toastmasters and Livery Beadles wore their red tailcoats and black gowns and what a colourful sight it was. The Metropolitan Grand Master and his consecrating team from Metropolitan Grand Lodge entered the Grand Temple to a fanfare by State Trumpeters. The atmosphere was electric and visiting brethren soon realised they were about to witness something quite special with the formation of this new, exciting and colourful lodge.

The Sheffield and District Masonic Choir, who had travelled down from Yorkshire and Derbyshire, were magnificent in their renditions during the ceremony. The choir was led by W. Bro John Wade who had put together the musical montage that befitted such a superb ceremony. The choir, supported by the visiting brethren, produced sounds that made the hair rise on the back of the neck. They performed the anthem 'Cornerstone' by George Linstead (1908-74), arranged by Christopher Powell, and a solo by W. Bro Mike Teanby who sang "Hail Masonry". The superb rendering of the National Anthem very nearly raised the roof with 740 brethren bellowing it out with pride.

To see the 'family tree' of The Gavel and Staff Lodge No 9835, please click here. 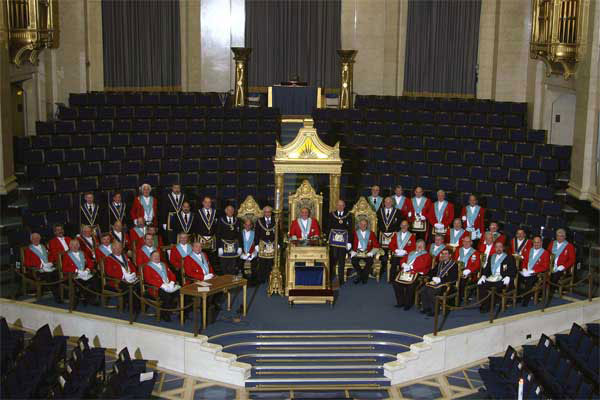 After the consecration of the lodge, the Deputy Metropolitan Grand Master R.W. Bro Russell Race DL PSGW installed the Worshipful Master W. Bro Mike Hyman into the chair of King Solomon who then in turn installed the founding officers of the lodge. The pride, precision and presentation from the Toastmasters and Beadles in their finery shone like a beacon during the ceremony.

The Worshipful Master, W.Bro Michael Hyman then presented the Metropolitan Grand Master with a cheque for £1200 for the Royal Masonic Benevolent Institute. After thanking the Worshipful Master and brethren of the lodge for their generous donation, the President of the Royal Masonic Benevolent Institute, W.Bro Christopher Craig presented them with a Certificate of Patronage of the R.M.B.I.

Bro Ron Smiley of Chelsea Lodge No. 3098 presented a superbly crafted ceremonial Light Apprentice’s Maul to the lodge to mark the occasion which was accepted by the Worshipful Master with great pride. The Gavel & Staff Lodge presented every visiting brother with a miniature gavel and commemorative programme as a souvenir of this historic day.

After the ceremony 480 brethren made their way to the New Connaught Rooms for the consecration banquet and festive board which was a splendid affair. Presentations were made to the Metropolitan Grand Master and the Deputy Grand Master by the Worshipful Master on behalf of the lodge. W. Bro Brian Key's rendering of the Master's Song was excellent and very emotional.

The Gavel & Staff's sponsoring lodge, Chelsea Lodge No. 3098, provided an excellent cabaret of comedy and music that had the brethren in stitches. The brethren who had the pleasure of being part of this super day and witnessed a little piece of Masonic history will remember it for a long time to come.

The Banner, Badge and Motto of The Gavel and Staff Lodge No 9835

The banner and the badge symbolise the two great and ancient professions of which our lodge is principally composed, Toastmasters and Beadles of Livery Companies, coming together in love and harmony, against a background of Freemasonry.

That background is signified by the Square and Compasses which are two of the three Great Lights of Masonry. The square is to regulate our lives and actions and the compasses to keep us within due bounds.

They are set against a light blue field; a colour which is described as characteristic of our Institution, being emblematical of universal beneficence and charity, and the expanse of "The Blue Arch of Heaven".

On the banner the lions stand on the mosaic pavement, the beautiful flooring of a Freemason’s lodge, reminding us of light and darkness, and the joys and sorrows of our chequered existence. The professions are alluded to by two lions which are said to represent strength and power.

Toastmasters, who traditionally wear red, are signified by the red lion bearing a gavel - the working tool of that trade. Livery Company Beadles are represented by the black lion, the more usual colour worn by them, carrying a staff which is a common feature of their office.

The lions look forward (heraldically described as "guardant"), guarding our ancient landmarks whilst looking forward to a bright future. Lions appear in both the coats-of-arms of the Sovereign and the United Grand Lodge of England, thus we are reminded of the first toasts of the evening - "and our duties towards The Queen and the Craft."

The badge has a border of dark blue and gold (the colours of higher honours), the border points out that, as it is "the hope of reward that sweetens labour", it should be every lodge member's ambition to be sufficiently diligent and dedicated to our genuine tenets and principles, as to aspire to success in our Mystic Order.

The banner likewise has side borders of dark blue and gold whilst the lower border, being crimson (an emblem of fervency and zeal) and shaped as a catenarian curve, alludes to the Supreme Order of the Holy Royal Arch - the foundation and keystone of the whole Masonic structure. Thus we are called to complete our Master Mason’s degree.

The English translation of the motto “In Unitate Stabilitas – In Stabilitate Vires”, is "In Unity Stability, in Stability Strength”.

The Banner of the lodge was dedicated at Freemasons’ Hall, London on Tuesday 15th March 2011, and was a gift to the lodge by the first Director of Ceremonies, W.Bro Michael Ramsden.